The Yeast of The Pharisees 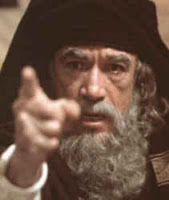 Self-righteous, hypocritical and petty.
These are adjectives that are thrown at Christians from time to time.
Though these are attributes that are shared by all people in varying degrees (no matter what their worldview is) they stand in stark contrast to Jesus, and the example He modelled to His disciples.
In fact when you read how Jesus spoke to people, you find that sinners that knew they were sinners received a gentle word from Jesus, but the religious pretentious received the most stinging condemnation and rebuke - the like of which it is difficult to imagine even the most zealous preacher today delivering to some of the worst moral delinquents.

Charles Swindol in his book "The Grace Awakening" relates a story where a couple of missionaries went to another country and lived in a community with other missionary families.
This family had a taste for peanut butter and wrote home for some, which was sent, and was soon enjoyed by the new arrivals to the field.
What they didn't know was that there was an unspoken rule of spirituality - it was considered "spiritual" to deny yourself peanut butter.
They had broken this rule, and soon were ostracised by the other families to such a degree, that they soon quit the mission field and returned home.

Though this example is extreme, and most of us would never get too excited over peanut butter, there is always the danger that there is some other thing that we attach a special mark of spirituality to.
And if the change is gradual enough, anyone can end up at the ridiculous.

There are 2 general types of people that have their hearts infected by this attitude:
Yeast has a powerful action, in that it only takes a small amount to confer its properties to a large batch of dough.
The same thing happens with a little of this teaching in the heart of a Christian.
We all share a common trait, we're sinners. We break the Holy Law of God in word, in heart, and in action; and regularly. But Pharisees are convinced on some level of their own righteousness, and they want people to know it.
When this yeast infects a person's heart, it puffs up the person, making them look and feel larger than they really are. What looks like larger-than-life zeal, holiness and righteousness is just a paint job (Matt 23:27,28).
The Greek word hupokrisis which is transliterated as hypocrisy in much of the New Testament, means more than not practicing what you preach.
It means to play act, to pretend. To make yourself appear to be more than you are.
In other words, a sinner pretending to be pious and perfect.

"Woe to you, scribes and Pharisees, hypocrites! For you tithe mint and dill and cumin, and have neglected the weightier matters of the law: justice and mercy and faithfulness. These you ought to have done, without neglecting the others. You blind guides, straining out a gnat and swallowing a camel! (Matthew 23:23, 24 ESV)

A gnat was unclean but tiny, and a camel was the largest unclean animal in the middle east.
Pharisees sweat the small stuff and rewrite the Law to major on those things that they feel good at. And since the weightier parts of God's Law like love, mercy, justice and faithfulness make them feel bad about themselves, they focus on the minor, external aspects. For example: "I don't smoke, drink or swear and I pay my tithes".
How else can you convince yourself that you're righteous, unless you make sure that you sweep the commands under the rug that make you feel like a failure, and market the visible aspects of the commands that you find easier.

"Two men went up into the temple to pray, one a Pharisee and the other a tax collector. The Pharisee, standing by himself, prayed thus: 'God, I thank you that I am not like other men, extortioners, unjust, adulterers, or even like this tax collector. I fast twice a week; I give tithes of all that I get.' But the tax collector, standing far off, would not even lift up his eyes to heaven, but beat his breast, saying, 'God, be merciful to me, a sinner!' I tell you, this man went down to his house justified, rather than the other. For everyone who exalts himself will be humbled, but the one who humbles himself will be exalted." (Luke 18:10-14 ESV)

Because Pharisees have a self-made code of righteousness (one that condones their actions and doesn't judge their hearts), they have a rather high view of themselves.
Instead of comparing themselves to Christ and The Law, they compare themselves to others through the lens of their favorite rules.
Unfortunately, God just doesn't evaluate us using our own standard - an idol would - but not God.
He uses His own perfect standard.

In the above text, the tax collector's eyes were open, he knew he was a breaker of God's Law, the only avenue he had left was to own up to it, and plead for mercy - and he got it!
Pharisees actually have a hard time of it; they don't seek grace from God, but believe they deserve blessing based on their performance, so they get none.

So once a Christian who initially humbled himself before God, and ran to Christ for mercy, gets infected with the Yeast of the Pharisee, this way of thinking takes hold.
Their joy and peace evaporates, because these are given by grace through the Holy Spirit.
A root of bitterness springs up, and they begin infecting others with this yeast.
They can't help themselves really, since they are 'denying themselves' so much, they become offended with others who haven't joined the 'works for wages' program.

It amazes me how many believers have such a low view of scripture, and such a high view of themselves.
I've often heard people denigrate the preaching/teaching/reasoning of the Gospel to the lost, saying that we ought to just witness through our lives.
Seriously?
It's obvious that our conduct should affirm the words of our lips and not contradict it, that we should always try to 'practice what we preach'.
But do these 'pious' types truly believe that their hearts are so pure and their lives are so bright, that they don't need to speak the Gospel which is the power of God unto salvation (Rom 1:16)?

I've heard it said that the sharing of the Gospel is 'one beggar telling another beggar where to find bread'. Beautiful ! There it is !
We are exhorted in scripture that as we received Christ Jesus the Lord, so walk in him(Col 2:6).
We might have cleaned up our act, but we are still fallen sinners with evil hearts, in need of mercy.

Beauty of the Law

"So the law is holy, and the commandment is holy and righteous and good.(Romans 7:12)"
The Law is good, but it mustn't be warped into a more tamed version of what it really is - holy commands from a holy God that have authority not just over our actions, but also the thoughts and intentions of our hearts.
Here's a subtle trap for Christians, but one that Pharisees become quite skilled at.
If we give the Law it's proper place it will show us how far we fall short of any real righteousness, and, like salt imparting thirst, drive us to drink deeply from Christ's well of grace.
This grace is both a shield and a remedy against the Yeast of the Pharisee.

For example: The Law says we must love our neighbour as we love ourselves (Lev 19:18).
The Pharisee redefines this commandment to "love your neighbour", and conveniently leaves out the as yourself part.
So while on his own scorecard he's worthy of commendation, in God's economy he's deserving of condemnation because he has daily broken and abused the whole Law in general, and one of the greatest commands in scripture in particular.


Now to the one who works, his wages are not counted as a gift but as his due. And to the one who does not work but believes in him who justifies the ungodly, his faith is counted as righteousness, (Romans 4:4, 5 ESV)

Email ThisBlogThis!Share to TwitterShare to FacebookShare to Pinterest
Labels: Growth and Maturity

I recently received this invite in a newsletter from Aantwoord.

It's apologetics training provided by Michael Ramsden and others from Ravi Zacharias International Ministries (RZIM).

So if you're in town, this should be well worth the investment of your time.

(Just wish they had something going on Johannesburg).

Posted by Jason Campbell No comments:

Email ThisBlogThis!Share to TwitterShare to FacebookShare to Pinterest
Labels: Apologetics

One of the fads that came through my old church with a vengeance was the "Toronto Blessing" phenomenon; characterized by drunkenness, laughter and other manifestations.
I came across the below YouTube clip yesterday, it's astounding! I knew this movement was very suspect, but I had no idea just how much!

The presenter shows some footage of these meetings; which includes Rodney Howard Brown and others.
He then takes you to some Hindu kundulini cult meetings, and shows how gurus lay hands on the people and they manifest the exact same manifestations!

The normal explaination for this kind of thing is that Satan is a counterfeiter. But ask yourself the question,who was experiencing these manifestations first? It's a new thing in the church.

Posted by Jason Campbell No comments: